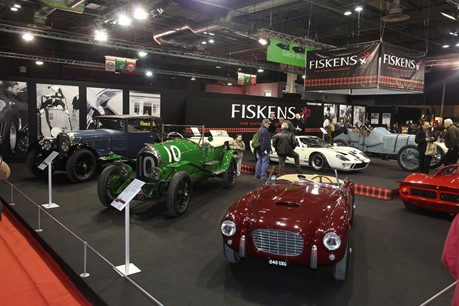 Fiskens, London's foremost historic automobile specialists, unveiled a stunning selection from their current inventory on the opening day (February 1) of this year's Retromobile Show in Paris.

A total of 11 cars made the trip from the London-based company's Kensington Mews to the French capital, where the character and variety of the vehicles on show instantly captured the imagination of the gathered crowds.

Perhaps most eye catching was the 1925 Bentley 3-Litre Team Car, the iconic marque’s first factory Le Mans entry and as such a piece of British motoring history. It was joined by two more Bentleys, one of them a remarkably original Speed Six Grafton coupe, with a superbly race pedigreed Lister Jaguar completing the British contingent.

Fine Italian engineering was also well represented on Fiskens’ stand, with a pair of Ferraris accompanying an extensively raced Maserati and a wonderfully maintained Siata. The line-up was completed by three historic French racing cars that span the automobile industry's meteoric technological development during the 20th Century, including a 1908 French Grand Prix Panhard-Levassor that was unveiled by contemporary motor racing star Olivier Panis.

1138 became the first factory works Le Mans entry in 1925 when it was piloted by Dudley Benjafield and Bertie Kensington Moir. A detailed restoration was carried out in 2001, and today the car represents a hugely important example of British motoring history.

With only four owners from new, including founder member of the Bentley Drivers club William Fowler, AH 1493 features many upgrades from its original 3-Litre specification, including a 4 ½-Litre engine, a C-Type gearbox and a 4 ½-Litre steering box.

This original Grafton Bodied Speed Six has enjoyed a comparatively sedate life, often in the hands of Bentley Drivers Club members. As confirmed in a detailed report by historian Clare Hay, FR 2630 is a remarkably original example.

The last 206SP built, chassis 032 was originally delivered to Vincenzo Arcuri before joining the famous Corrado Cupellini collection. It remains a very original example and has been regularly campaigned throughout Europe. It now forms part of a significant private collection.

One of ten ultra rare alloy 275 GTB Competition models built by Ferrari, 07437 has a genuine period race history and scored GT class victories throughout 1967. Recently prepared by marque specialists Lanzante Motorsport, 07437 has proved itself highly competitive at both The Goodwood Revival and Le Mans Classic.

With a well-known, continuous history from new, BS 525 has been looked after on behalf of its fastidious European collector owner courtesy of Bugatti specialists Ivan Dutten Ltd. Presented in superb condition, this matching numbers 208S has had great expenditure lavished upon both the engine and chassis.

Chassis 2427 was campaigned extensively throughout the 1950s before forming part of the famous Fielding collection. It remains one of the most authentic examples in existence, still fitted with its original coachwork and running gear.

BHL 122 has extensive race history both in Britain and abroad, including numerous runs at Goodwood. Meticulously prepared by Pearsons Engineering for its current owner of over a decade, it has been a front-runner at every contemporary event for which it is eligible.”

Retromobile continues through Sunday (February 5) at Paris’ Porte de Versailles, where Fiskens’ stand can be found at J91, Hall 3.