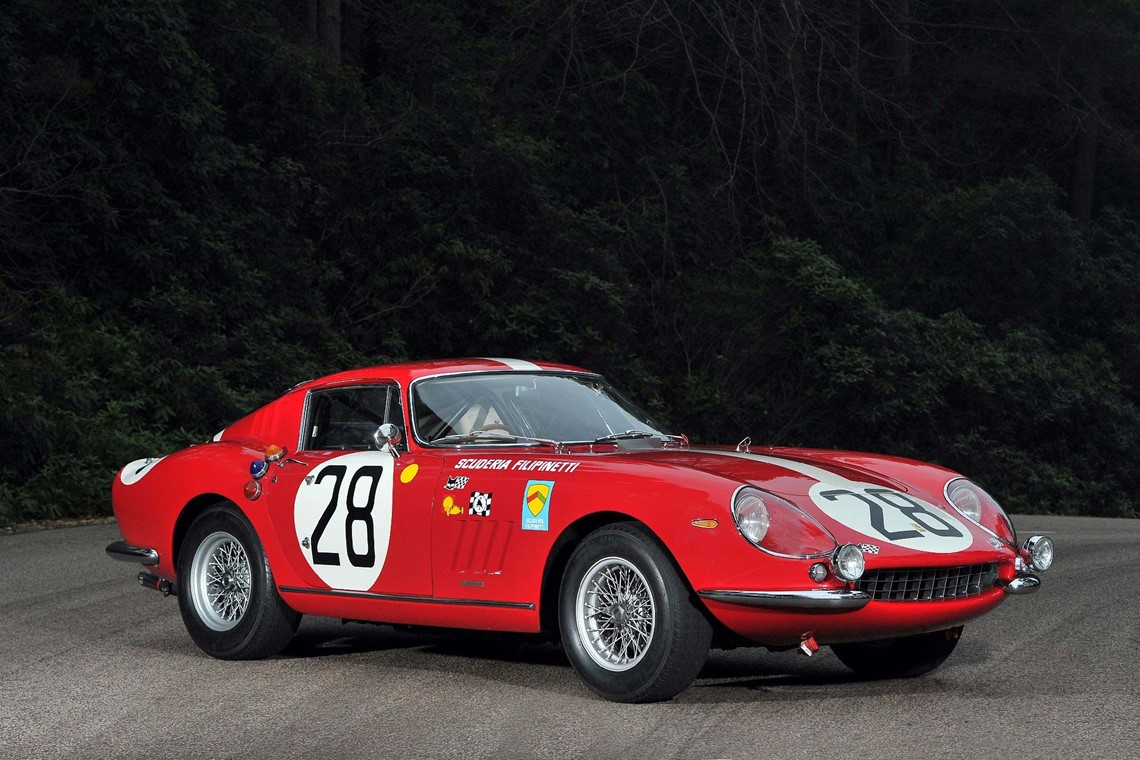 Chassis 9079 is not only one of the twelve 275 GTB ‘Competizione’ long-nose models built by the Ferrari factory for the 1966 season, but also one of the most raced of the ultra rare right-hand drive examples.

The ‘Competitzione’ cars have numerous competition features to separate them from their road-going brethren. These included a thinner gauge chassis, extra cooling vents in the Scaglietti-designed lightweight aluminium bodywork and a special long-range fuel tank.

This 275 GTB/C was originally delivered to Georges Filipinetti, owner of the famous Swiss based Scuderia Filipinetti racing team, who entered 9079 in the 1967 Le Mans 24 Hour race. Driven by Dieter Spoerry and Rico Steinemann, the GTB/C crossed the line after 24 hours in 11th place, winning its class outright.

Following the race, Filipinetti sold 9079 to Swiss racer Jacques Rey who, in 1968, once again entered 9079 into the Le Mans 24 Hours, sharing the drive with Claude Haldi. The disappointment of not finishing at Le Mans didn’t prevent Rey’s assault on the gruelling Spa 1000km in 1969, this time driving with Edgar Berney. The pair went on to win their class and finish 14th overall.

Later that year 9079 was again on the start line for the third year running at the Le Mans 24 Hours! The practiced pair of Rey and Berney were again behind the wheel but when the Ferrari developed an oil leak early in the race they were forced into the pits for an engine oil top-up. However, this fell foul of the regulations and the Ferrari was disqualified. Fortunately there was no such drama at their final race of the season when 9079 scored a class victory in the 500km of Imola.

Extensively restored by Fossil Motorsport for the Concours lawn, 9079 finished second in the competition Ferrari class at Pebble Beach in 2006. Since returning to Europe 9079 has been meticulously prepared in its current front-running specification by Gelscoe Engineering. It has successfully returned to the race circuits of Europe, including at the Goodwood Revival, and notably finished fifth in plateau at the 2008 Le Mans Classic before winning the Italian Historic Car Cup outright in 2010. This is a highly important, class-winning Ferrari 275 GTB/C and the only example to have competed at Le Mans three times.