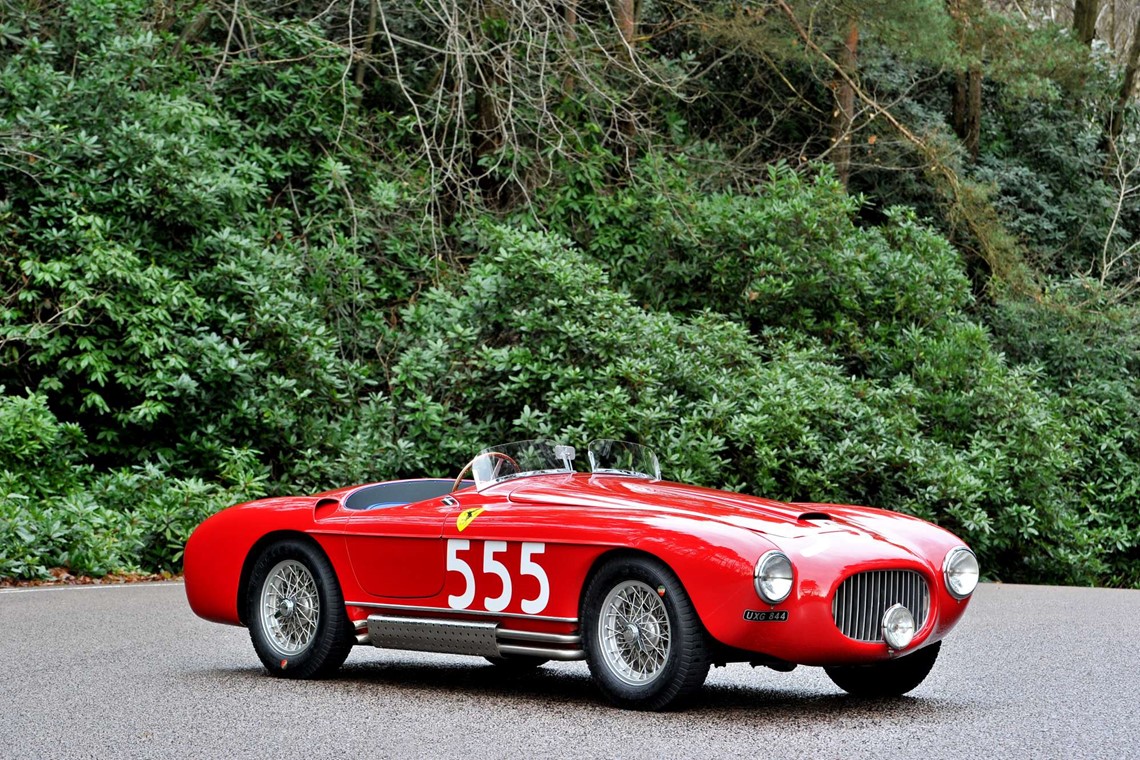 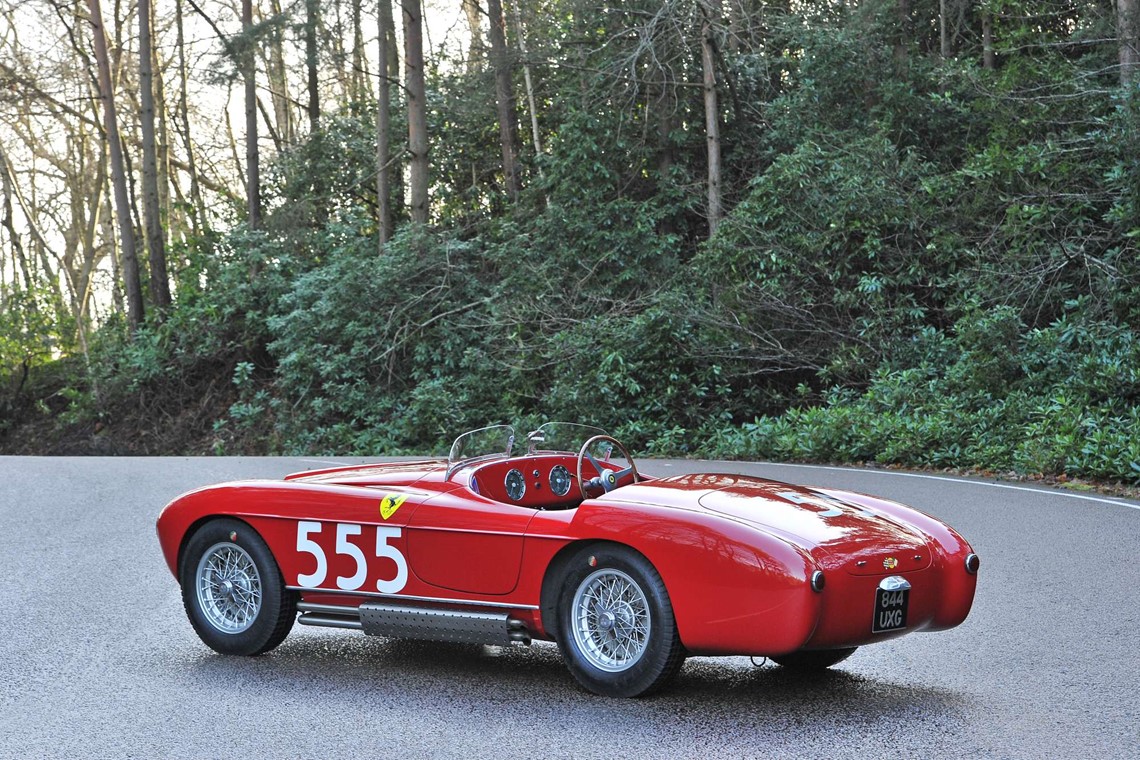 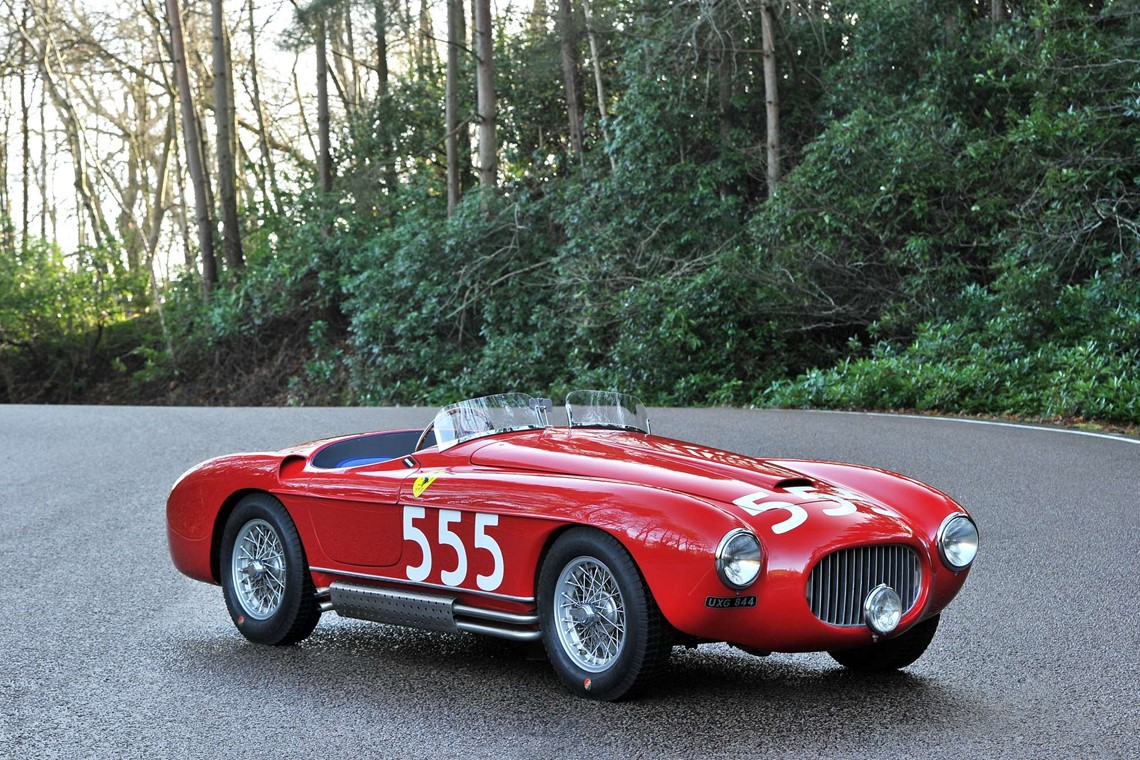 The 212 was an evolution of Ferrari’s most successful model on the track to date: the 166. Unveiled at the Brussels Motor Show in 1951, it was offered in two specifications: the Inter, essentially a road-going Gran Tourismo, and the Export which, with its slightly shorter chassis, was aimed at the gentleman racer. Both cars featured a 2.6-litre V12 engine designed by Gioacchino Colombo, whose creation in various iterations would power some of Ferrari’s most successful racing cars throughout the 1950s. The Export’s engine was a little more powerful than that of its sister car, with a higher compression ratio and many using triple Weber 32DCF carburettors that helped push peak power to a heady 175bhp.

Twenty-seven 212 Exports were produced, in Barchetta, Berlinetta, Spyder and Convertible configurations. It is testament to the design quality of both the engine and chassis that it was raced successfully in all its different guises.

For two heady years (1951-1953) the 212 was king of the international racing scene and this example, chassis 0102E, was very much a part of the model’s success. Completed in March 1951 with a Barchetta body by Touring of Milan, its first owner was the Italian Count Giannino Marzotto, the eldest of the four infamous Marzotto brothers. Of the Marzotto brothers’ many racing triumphs perhaps the greatest was Vittorio’s at the 1952 Monaco Grand Prix. This famous win would be Ferrari’s first on the streets of Monte Carlo. Between them, the brothers appear to have owned four of the earliest-built 212 Exports. With so many Exports registered in the Marzotto name, records are often unclear about which chassis was raced at which event, but Vittorio won the 1951 Giro di Sicilia in April aboard one of the family’s 212 Exports.

Subsequently, ownership of 0102E passed from Marzotto to fellow gentleman racer Pietro Palmieri of Rome. Palmieri’s first taste of victory came in August 1951 in his newly acquired 212 when he took a class win and second overall on the Giro delle Calabria. A week later he was racing 0102E again, this time in Senigallia on the Coppa Adriatica where he finished fourth. On another occasion, newspaper heir and fellow entrant Bobby Baird had his own problems in practice for the TT when the rear axle on his 4-litre Ferrari failed. Palmieri offered his 212 to Baird who drove a magnificent race to bring it home in sixth overall and first in class.

Following further racing accolades, 0102 was sold to Hollywood studio 20th Century Fox, which had started developing a film to cash in on the public’s growing interest in international motor racing, based on Hans Ruesch’s novel, The Racer. This was loosely hung upon the life of German racing legend Rudolf Caracciola, who overcame a humble upbringing to win the European Drivers’ Championship three times.

The car was adapted to fit the fictional requirements of the plot, being presented in the film as a ‘Burano’. Modena-based coachbuilders Autodromo were commissioned to carry out the modifications, which involved lengthening the nose, lowering the rear panels and creating dramatic side pipes.

Following its entry in the 1954 Mille Miglia as car number ‘555’ where it was filmed in action, 0102E was flown to California for further studio-based shooting. With its place in Hollywood history now confirmed, 0102E was sold into private hands and stayed in California for many years in the ownership of various enthusiasts. As time passed it remained something of a curiosity, clothed in its Burano bodywork, until it was bought by Chicago dealer Joe Marchetti who raced it at the Monterey Historic event at Laguna Seca. When Art Valdez bought the car in 1988, 0102E finally returned to Europe where it was driven in the Mille Miglia.

The car caught the attention of Canadian-based historic racer and collector Abba Kogan who bought 0102E in 1996 and raced it at the Monaco Historique that year, and again in ’03 and ’04, after which British Ferrari specialist Terry Hoyle carried out a detailed mechanical refurbishment.

0102E was acquired in 2007 by the vice-chairman of a leading sportswear brand. By now the car’s provenance had been uncovered and its stature ensured that it was welcomed at the world’s leading classic car events. The new owner, a keen driver, commissioned Modena-based specialists Autosport to carry out a full restoration under the guidance of Marco Arrighi and his team at Ferrari Classiche. This included the removal of the original Touring bodywork with its ‘Burano’ modifications, and the exhaustive creation of a replica body with which the car could be properly enjoyed without fear of any resulting damage. 0102E’s original body remains intact, stripped of paint allowing Autostrada’s 1953 handiwork to be clearly seen. Classiche certification was obtained in 2009. Once the painstaking restoration work was completed the owner took part in numerous events including the Gstaad Classic, the Techno Classica at Essen and two outings on the Mille Miglia in 2009 and ’11, returning the car once more to its spiritual home on the winding roads of northern Italy.

The story of 0102E is undoubtedly one of the most dramatic and colourful in Ferrari history. Not only was it raced with great success in period but, with its unique Burano body, it also set the silver screen alight with a true Hollywood great at the wheel. 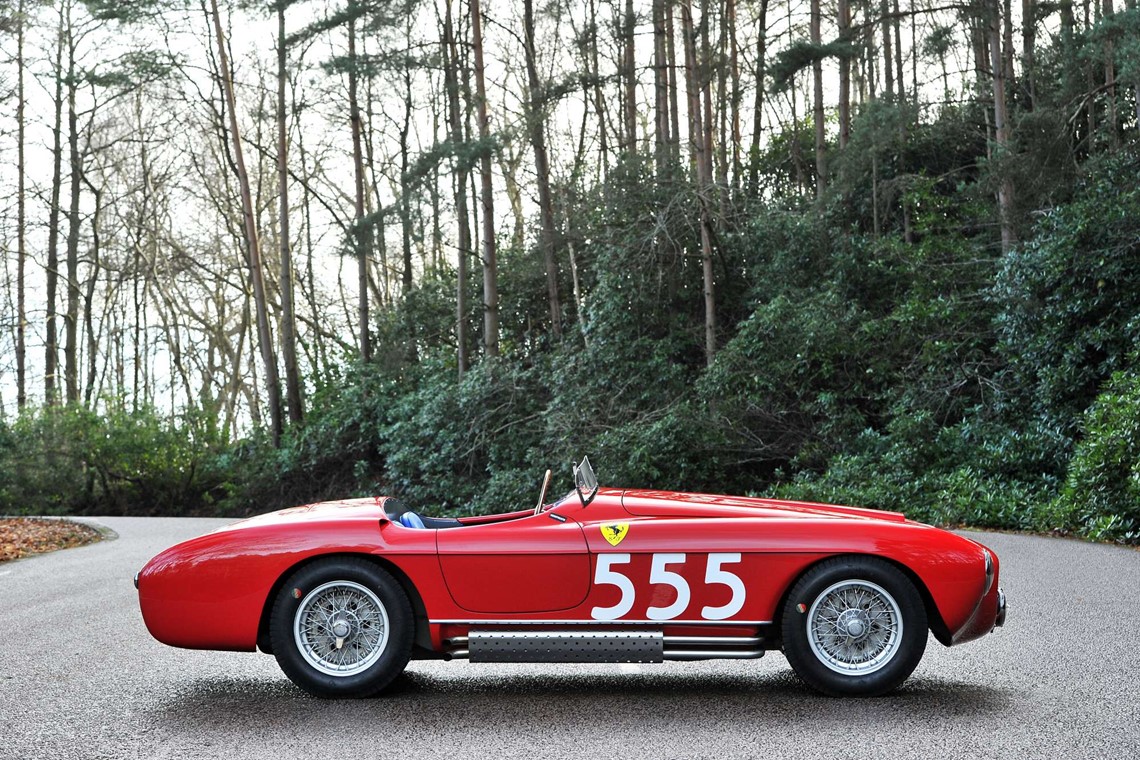 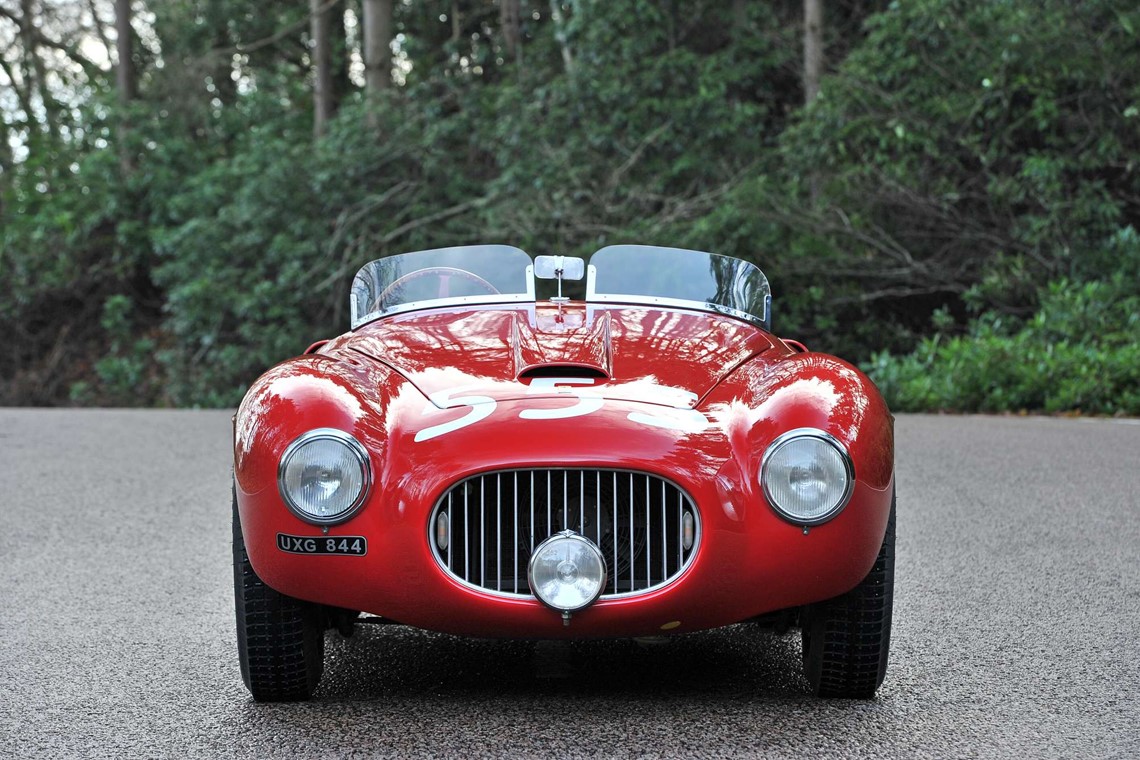 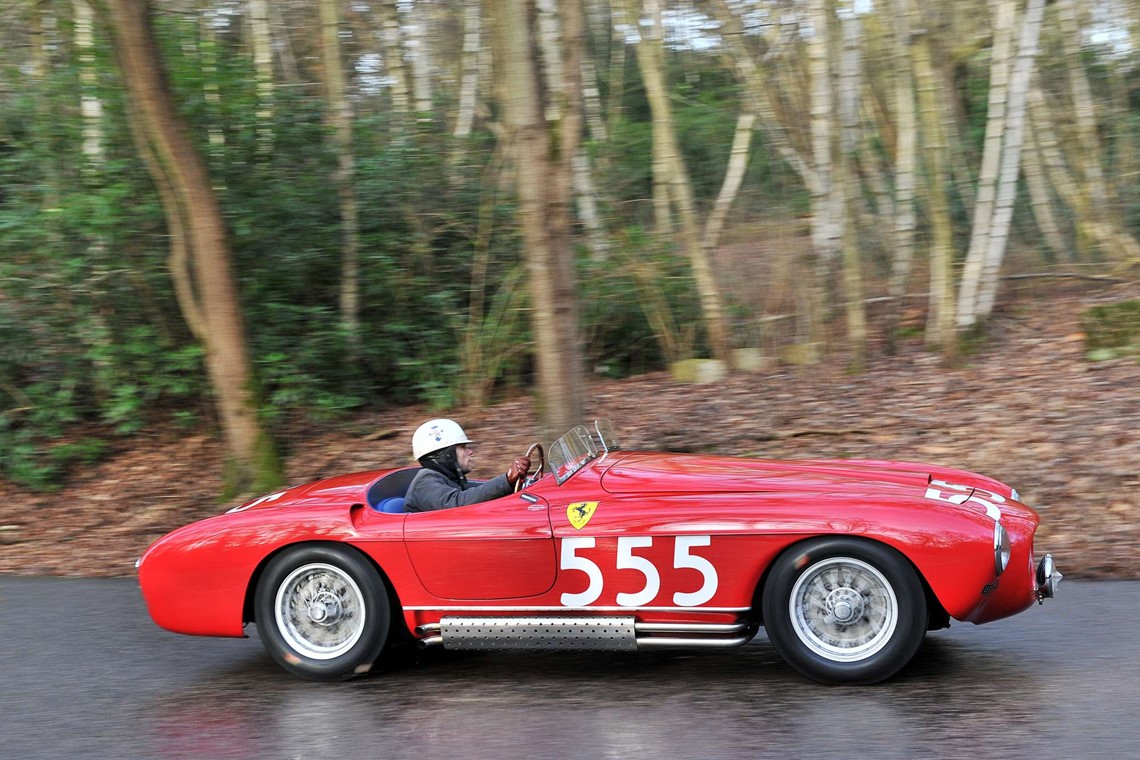 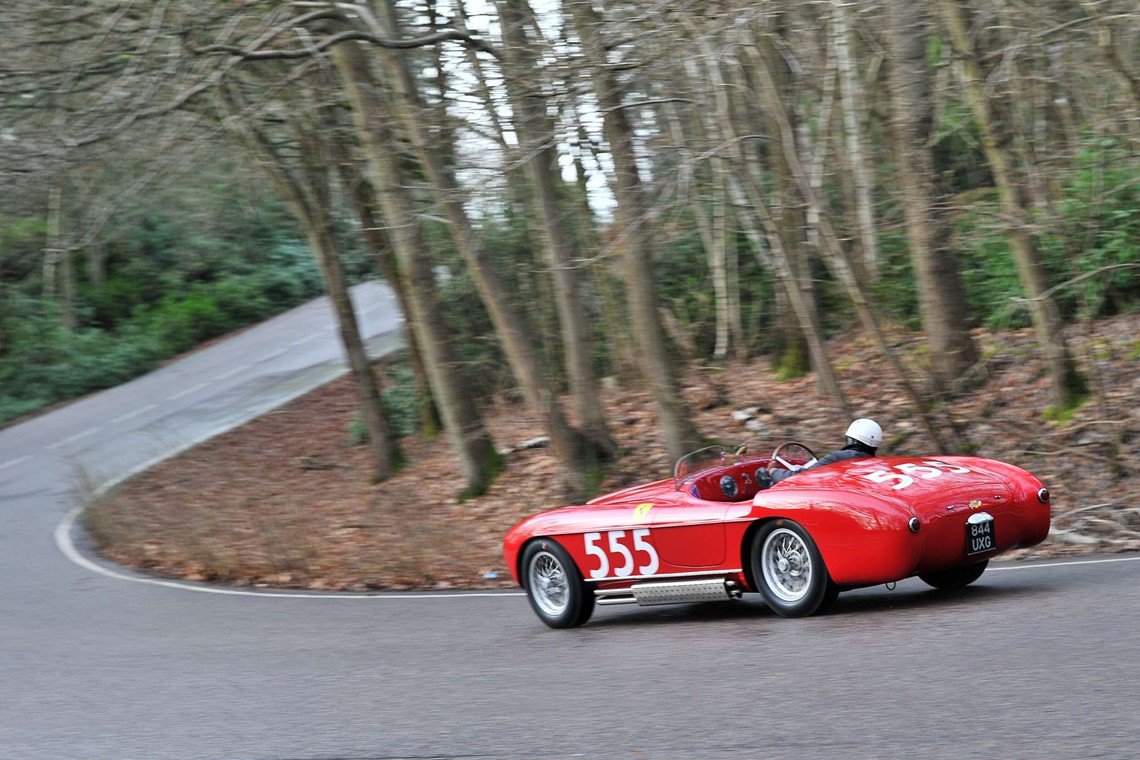 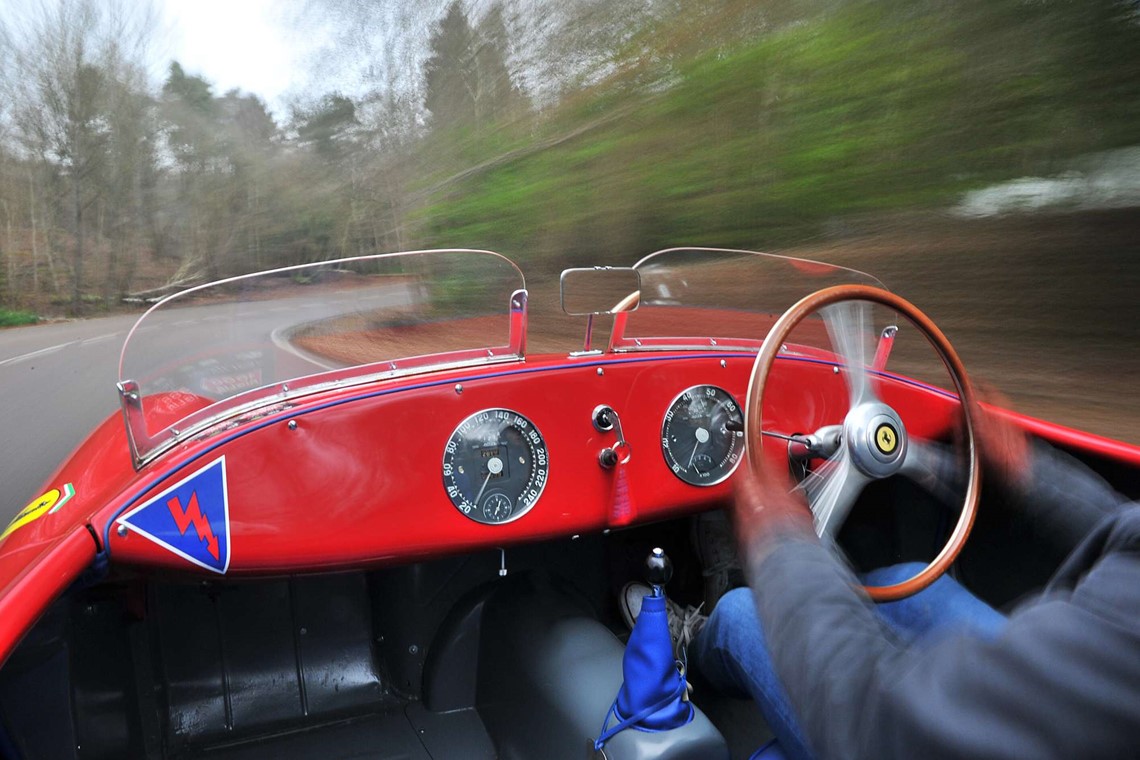 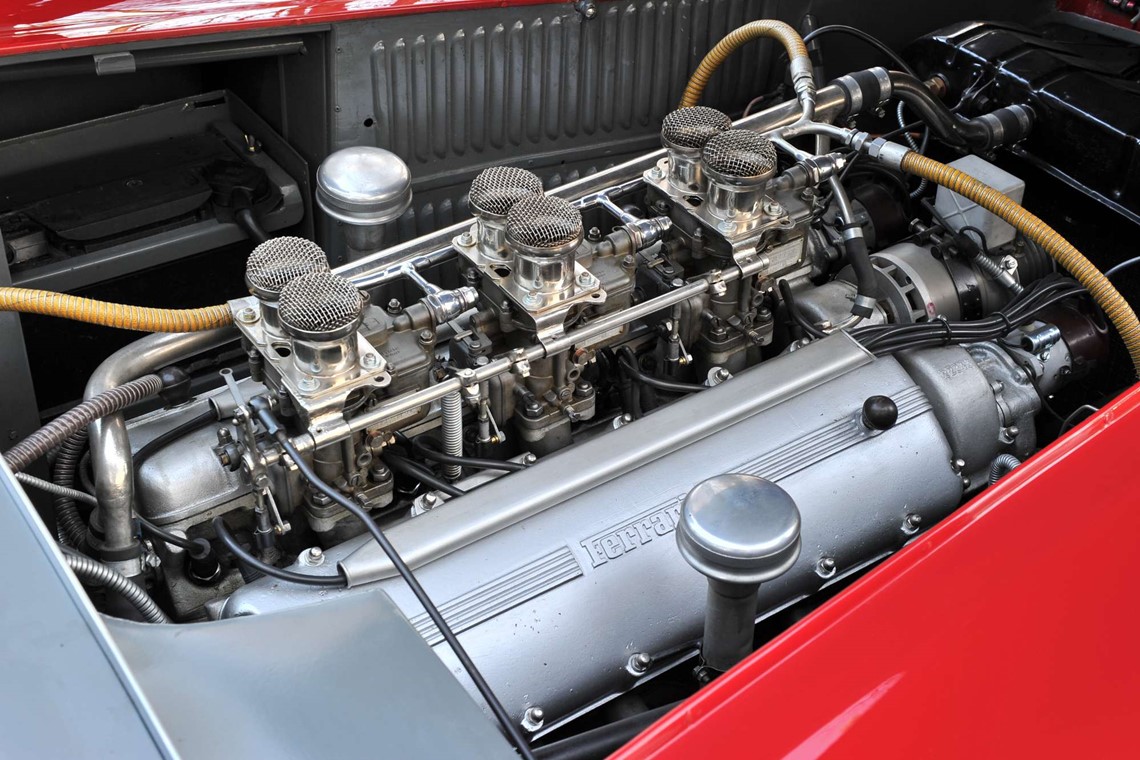